These days I'm thinking, writing, and doing plenty about the need for Africentric education. Below find an excerpt from my novel THE ALCHEMISTS OF KUSH, soon to be republished by MVMedia, based on one of my experiences as a teacher of some very smart young African men whose intelligence at discussing, analysing, and writing about literature no non-African teacher had ever bothered to notice or encourage.

If you want to read a study of 157,000 US kids explaining why kids of all racial backgrounds preferred African and Latinx teachers to European settler teachers, well, I've got one for you right here. If you'd rather read the short NPR summary, I've got you covered. And now, on with the show: 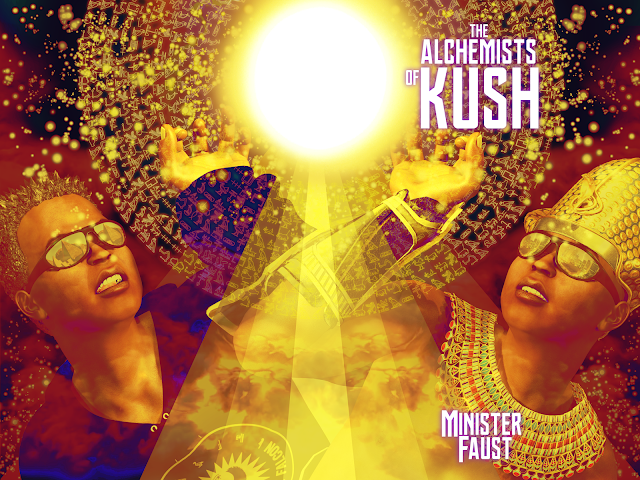 “You two kill me!” said Moon that same night at the Hyper-Market. “I’m really disappointed with you!”

Raptor and Jackal, staring at feet, floor, walls, anything.

“Brother Moon, what difference does it make?” said Jackal. “We’re still gonna get our diplomas—”

“Worthless diplomas,” he growled. “You’re taking, what do they call it now?” He glanced back at their class schedules he’d asked to inspect. “English Thirty-Two?”

“When I was in school they called it English 33. Remedial. Get a diploma, Do Not Pass Go, Do Not Go to University.”

“Brother Moon, all respect due,” said Jackal, tilting his head so his locks grazed his right shoulder, “but, but, university? I mean . . . what good’s that gonna do?”

“Better jobs, better money, live longer and healthier? What’s not to like? Get smart or die slaving!”

“My dad has a PhD,” said Jackal in a small voice.

Raptor snapped his eyes towards his brother, who never talked about his father. Moon’s eyes widened.

Moon paused to pour coffee for a customer and give him a login code for carrel #3.

Jackal: “I can’t afford fifteen-twenny grand trainin for a job they aint even gon give me.”

“Listen,” said Moon, “you two are smart. You know the Scrolls, you’re masterful with words when we make our Daily Alchemy . . . we talk about books, you’re both insightful. Your posts on the Street Falcons blog are excellent—”

“You read those?” The bright words’d bubbled out of Raptor before he could stop them.

“Course I read them! Why wouldn’t I?”

Moon brought them to carrel #6, opened up their school’s website course listings for English and laid out their battle plan: they were immediately to get out of Grade 12 remedial lit class—English 30-2—and re-register in half-year Grade 11 academic English, 20-1, so they could take 30-1 in the second semester. He’d give them any help they needed.

“But later for this ‘good enough’ bullshit. You two have gold minds. Why your teachers never saw that before—well, we know why they didn’t see it. When it’s our kids, getting sixty percent is supposedly the best we’re capable of. No cause to worry or even call home.

“I’d been teaching you? I’da pushed you into advanced placement. That’s what I took when I was your age, and not even half the class had your smarts. They were just there because their parents were judges, doctors, professors—ambitious people who wanted trophy kids, regardless of what they could actually do.”

“Bruh, success is like . . . like a penalty shot. You grab your stick, focus on the net, you still gotta beat that goalie, but yeah, you could score. But you skate off the ice, take your blades off, then you have zero chance of hitting the mesh.

“I can’t guarantee you’ll make the point, but I do guarantee that you’ll get that shot, and that means being ready for it when it comes, and staying on the ice.”

Moon asked him what he wanted to do for a career.

“You wanna be a producer? Supreme.” Still at carrel #6, he image-Googled Jay-Z, brought up the boyish-looking aging rapper in a power suit.

“So you go to NAIT and study sound engineering. Get a diploma so you can work in any music studio anywhere in the world. You take some business courses so you can handle your own money—”

“Think about basketball, bruh,” said Moon, image-searching for shots of b-ballers. He clicked on two, left them up.

“The buzzer’s gonna go off in ten seconds. Do you get lazy, like this guy, don’t even run, just take the shot from behind the centre line? Or do you run like this guy to take your shot from the key?”

Clicked back to Jay-Z.

“Jay-Z’s one in a million. There’s maybe a coupla dozen music producers earning his kinda money. You’re damn right, he’s smart. You think a lawyer’s smarter than he is?”

“Brother’s doing well,” said Moon. “But outta all the uneducated but intelligent young rappers out there, how many you calculate wanna get rich, but end up poor? Maybe, ninety-nine-point-nine-nine-nine percent?

“Now, what percentage of educated lawyers who aren’t smart get rich? Or at least Maãhotep-comfortable?”

Raptor rolled back on his heels. Jackal eyed him sideways.

“You transform that?” said Moon. “Yes, Leadites and Pyrites buried your father’s gold. That’s a fact. It’s serious. But you were born in the Savage Lands, transform? So what can you see, because your Shining Eye was forged here, that your father can’t?”

Jackal looked at the screen, then at Moon. “I can see the traps? The pits the chainsmen dug in the ground?”

“Transformed. And what else?”

“I can track the Wanderers? Like, to build up an army?”

“I can train the Mesnitu and make my own forge?”

“I can drain the Swamps of Death and master the elevated lands, and raise a Golden Fortress for the orphans of the Savage Lands—”

“I can create hope, joy and justice to make stand those who weep, to reveal those who hide their faces, and to lift up those who sink down—”

And all three of them leapt in: “In doing so, we will all rise nearer to the Supreme.”

Grade 7. Raptor, sitting at the back of the class. His homeroom teacher Mr. Manna, the same one who’d called him “dumb as a sack of hammers” in front of a colleague without realising he could speak English . . . he was making the class announce what career they wanted when they grew up.

Raptor spent the long wait with coals in his lungs till it was his turn, hating being forced to talk in front of the class, but telling the truth: he wanted to be an astronomer.

In front of everybody, Mr. Manna told him he should focus on something attainable.

“Do you know what ‘attainable’ means, Raphael? You’re probably good with your hands, right? How about being a cook or something like that? Or maybe house painting. Long as there’s houses, there’s always gonna be money in house painting. But a scientist?” He actually goddamn chuckled.

A gaping asshole. Raptor’d never doubted his own brain: when he put his mind to a task he was smarter than almost anyone he knew.

But so what? What was attainable on the open roads of the world when the pyrites posted men like Mr. Manna with swords at every gate and border?

Jackal was looking at him, too, eyes waiting. “I said, what do you want to do for a living?”

Instantly, Moon: “I don’t believe you. If you could do anything, if you could be anything—”

And the cell phone ringing in his pocket.

Checking: his mother. Excused himself, slipped into the corner to take it.

After he motioned for Moon to step away from the cash register so they could talk in the corner.

“Based on your voice, should I be afraid?”

“I can stall her for maybe a week.”

“Stall her? No disrespect, but how hard a woman is she to deal with when she’s angry?”

Moon snorted. “Thanks for the heads-up. In the meantime, you get your registration changed, transform? And tomorrow I wanna X-ray your math skills.”

9 pm. His and Jackal’s shifts were over, and since Jackal’s parents were actually letting him sleep over a second night in a row (what was one more teenager inside a Somali apartment?), they headed out together.

His mother. She was resourceful. Like a detective when she wanted to be. She knew where Moon’s businesses were.

Raptor’s worlds were on a collision course and there was nothing he could do to stop it. And not Static, not Master Jehu, not even Hru and all his legions armed with shining golden hammers had the might to hold back planets.

Eddie Murphy: “This is how scared white people have black people. I was sitting in my office with Mike Tyson and Don King— my office, at Eddie Murphy Productions. The only two people that work there that are white are my managers that work for me. And we go on the subject of white people, and the government, and shit like that, and what happened is, we started whispering, ‘The white man….’ They got you so scared you whisper in your own house…. “Now that’s a helluva thing. Me, Mike Tyson, and Don King, sitting in my own office whispering about the white man. I said, ‘Yo, man, they have done such a thing on us that we whispering and he aint even here.’ And that’s just something that’s in you naturally—what the fuck is up? And you don’t know when they’re listening or when they gonna get you.”
Read more

The danger that fascist groups pose to safety and democracy in Canada, and their disturbing connections to the Canadian military | The failure of Canadian media to take the fascist threat seriously, even after the lethal terrorist attack against the Quebec mosque | The best new ways to fight them LISTEN/DOWNLOAD In Canada, the threat posed by fascist, Whitesupremacist, and similar extremist groups is real, and growing. The proudly Islamophobic Soldiers of Odin are active right here in Edmonton, and even the right-wing Daily Mail newspaper in England describes as them a neo-nazi group. The Proud Boys are also on the march, and the Southern Poverty Law Centre in the United States names them as a hate group. And then there are the Three Percenters, the Ku Klux Klan, and many others like them, supported by extremist Canadian media and aligned with one major federal party. Alarmed by the rise of fascism in our midst, especially after the election of US president Donald
Read more