Showing posts from November, 2007
Show All

TONIGHT ON THE TERRORDOME: Rozena Maart on Neo-Apartheid South Africa


South African novelist Rozena Maart is an English professor and a practitioner of psychoanalysis. She earned her PhD from the University of Birmingham. In 1987 when she was 24, Maart was nominated for the “Woman of the Year” award hosted in Johannesburg, for her work opposing violence against women and for starting, with four women, the first Black feminist organization in Cape Town, Women Against Repression [W.A.R].She has been a researcher and writer for the Canadian Panel on Violence against Women. As well, she ‘s won the $10,000 Journey Prize for Best Short Fiction in Canada in 1992, and her writing was selected by the Governor General to be among that of twenty four Canadian writers of African descent whose work is being exhibited across Canada.Last week Rozena Maart and I spoke in Edmonton about a variety of issues, although she was in town to promote her newest book, the novel The Writing Circle.Our conversation began very conversationally…
1 comment
Read more

TONIGHT ON THE TERRORDOME: Vijay Prashad - From Bandung to Durban 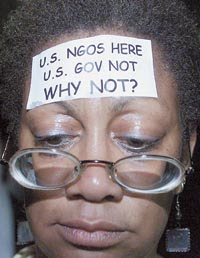 In late summer, 2001, the international community convened in Durban, South Africa, for the World Conference Against Racism.At stake was the making of a global declaration and agenda against the European domination of the planet called imperialism by some and Whitesupremacy by others, among many descriptions. But instead of agreement, delegates from over 160 countries found themselves filibustered by former colonial powers such as Belgium and boycotted by the United States.


Many delegates found the final declaration to be a drastically understated document. Instead of declaring European slavery of millions as a crime against humanity, the document went only so far as to address that crime with “profound regret.”But for a short time, whatever the conference’s failures, the world was focused on the former apartheid state for a discussion on the globe’s ongoing racial hierarchy and its enormous damage to the political, economic, social and ecologic…
Post a comment
Read more

Here you can find PE's brilliant song and video for "Black Steel in the Hour of Chaos."

I also just recently found this strange video for "So Whatcha Gon Do Now?" from the underrated 1994 Muse Sick-N-Hour Mess Age album. The video has nothing to do with the song, but Oliver Stone fans will probably enjoy the piece.

And don't forget Mali's Salif Keita and this excerpt from "Souareba."

Mind you, I love the sonic simplicity and visual impact of this song/video combo by Gnarls Barkley for "Crazy." A pop song? Sure! And an excellent one at that. Wish I'd done it (can't sing, though).

And because my tastes are catholic (not Catholic), here's a classic not by a Blackman, but by the Man in Black.
Post a comment
Read more
More posts