Showing posts from December, 2006
Show All

Star Trek XI? The Adventures of Young James T.Kirk? And why Brent Spiner has his doubts and what he says about Star Wars, and oh, just read it.

"One of the most respected names in the world of Star Trek other than that of the late ‘Great Bird’ himself Gene Roddenberry is Robert H. Justman. Justman during an impressive career played a crucial role in helping get Star Trek: The Original Series and Star Trek: The Next Generation off of the ground. "However due to stress related illness the producer retired back in 1987 after having helped launch the Next Generation. Since that time he has continued to support Star Trek and in a new interview for Star Trek Magazine he gave Star Trek Movie producer J.J. Abrams a message of encouragement. "Though the new movie is likely to be a reboot with a younger Captain Kirk. Justman remains open minded. "'I don’t know much about the new film, so I don’t see why I should write it off in advance,” Justman explains. “ I remember how some people tried to write – off Star Trek: The Next Generation before they saw the show. So all I’ll say at this point i
Post a Comment
Read more 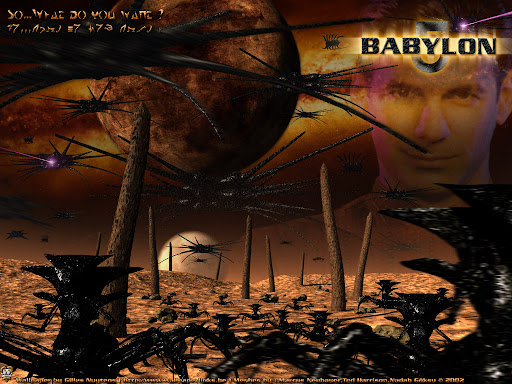 "The thrust of the news is this: straight-to-video BABYLON 5 adventures...involving B5 characters in an anthology format...should arrive late next year. Written and directed by JMS ." "Despite declining ratings for Battlestar Galactica on SciFi Channel, nearly universal critical acclaim along with robust DVD sales have led Universal Home Video to consider greenlighting a Battlestar Galactica direct-to-video telefilm , which will presumably air on The SciFi Channel, after debuting on home video, sources tell Geek. "If it goes forward, the two hour telefilm will shoot in March during the series hiatus and prior to the commencement of production on the series fourth season in June. While there is no story for the telefilm at present, plans are afoot to come up with a screenplay that doesn’t step on existing continuity for the series, but utilizes most of its existing sets. "There is also speculation the telefilm will somehow tie into the mythology for the Gal
1 comment
Read more

"The late "Godfather of Soul" James Brown will rise again -- on screen. "Spike Lee has signed on to direct a feature film about the singer produced by Brian Grazer and Imagine Entertainment, Paramount Pictures announced Wednesday. "'It's an authorized biography done with the cooperation of Mr. Brown before his passing," Paramount spokeswoman Nancy Kirkpatrick said. "Lee will rewrite a draft by Jezz and John Henry Butterworth, the trade paper Daily Variety reported Wednesday. The script has been through several drafts since Steve Baigelman wrote the original. The movie could be in production by late 2007, Variety said.... "Brown's music career will come full circle when his body is brought to rest on the stage of the legendary Apollo Theater in Harlem, where he made his explosive debut, and the world changed to his beat. "The public will be permitted to visit the Apollo today to have one more look at a man who helped stee
Post a Comment
Read more 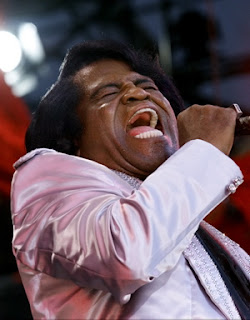 TONIGHT ON THE TERRORDOME: POLITIC LIVE 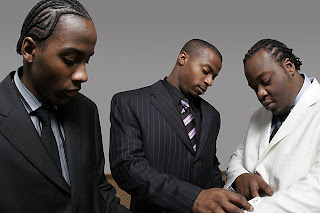 From my article in this week's Vue Weekly, and from tonight's edition of THE TERRORDOME , the sad and glorious story of how local hip hop sensation Politic Live got jerked all along the way to making a phenomenal album : "So many of history’s greatest artists reached the heights of fame because some benefactor’s bucks put them there. "But if you fire up the ol’ the Alternate History Scanner and search under keywords 'Accident + Error + Scam,' you can scroll for years through the millions of would’ve-been-titans who, say, dropped dead halfway through writing the manuscript that would’ve been the world’s finest novel, or the composers whose memories and symphonies were erased by the unexpected meeting of skulls and speeding doors, or the musicians whose potential greatness was terminated by the intersection of their talent and a producer’s charlatanism. "Pore over that list long enough and you might find the name of E-Town’s finest hip hop band, Politi
Post a Comment
Read more

Publishers Weekly gives FROM THE NOTEBOOKS OF DOCTOR BRAIN a starred review! 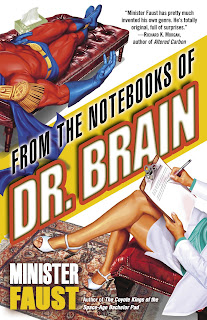 UPDATE: FOR WHATEVER REASON, the link to the review works sometimes and doesn't others--thanks to those of you who let me know. So I'm including the review at the end of this post. And thank you in advance to President Chavez for talking up the book at the UN. The book will make an excellent Christmas gift, of course, even though it won't be available until the end of January. Still, you can pre-order it... I believe there's a discount for orders of one thousand or more. F rom Publishers Weekly: Starred Review. "Masquerading as a self-help book for superheroes, this sharp satire of caped crusaders hides a deeper critique of individual treatment versus social injustice. Faust ( The Coyote Kings of the Space-Age Bachelor Pad ) provides funny and knowing caricatures of the famous figures of American comic books via an extended therapy session by Dr. Eva Brain-Silverman. Analyzing their various mental hangups, Dr. Brain attempts to help heroes like irascible b
3 comments
Read more

TONIGHT ON THE TERRORDOME: Kathleen Cleaver on the History and Legacy of the Black Panther Party

Kathleen Neal Cleaver is the former National Secretary of Communications for the Black Panther Party. Born in Dallas in 1945, Kathleen Neal became involved in the American human rights struggle in the 1960s. By 1967, she went to work full-time for the Student Non-Violent Coordinating Committee, before meeting author and Black Panther Party Minister of Information Eldridge Cleaver . The Black Panther Party was a revolutionary street organisation whose activities ranged from observing and confronting police during acts of brutality, to operating a Free Breakfast for Children Programme and opening medical clinics to treat inner city residents. After marrying Eldridge Cleaver , Kathleen Neal Cleaver helped coordinate the Party’s national campaign to free Minister of Defense Huey P. Newton from prison. After Eldridge Cleaver was wounded in a confrontation with police and another Party member was shot to death , Eldridge fled to Cuba and then Algeria . Kathleen Neal
1 comment
Read more

Two former CIA analysts on the effects of Israeli occupation

You might expect that CIA analysts, present or former, would approve of the US-funded Israeli occupation of Palestine. Read on: "We have long played with words about this, labeling Israel's policy ' ethnocide,' meaning the attempt to destroy the Palestinians as a people with a specific ethnic identity. "Others who dance around the subject use terms like 'politicide' or, a new invention, 'sociocide,' but neither of these terms implies the large-scale destruction of people and identity that is truly the Israeli objecti ve. "'Genocide'--defined by the UN Convention as the intention 'to destroy, in whole or in part, a national, ethnical, racial, or religi ous group' -- most aptly des cribes Israel's efforts, akin to the Nazis', to erase an entire people. (See William Cook's "The Rape of Palestine," CounterPunch , January 7/8 , 2006 for a discus
Post a Comment
Read more

David Simon of THE WIRE on African-American viewers, characters, directors and writers

The Wire is one of my favourite television shows ever , not only because so many episodes are directed by the superb Br. Ernest Dickerson, but because the writers have woven such a complex kente of American life, particularly the suffering that silenced people experience during the era of the so-called War on Drugs. Below is an excerpt from Slate's interview with series creator, writer and producer David Simon, whose insights into the world he depicts come from years of work as a Baltimore Sun crime reporter, and a year's "ride-along" with the Homicide unit (which formed the basis for his nonfiction masterpiece Homicide and the excellent Tom Fontana TV series of the same name, for which Simon also eventually worked as a writer and producer). "S late : Some of our readers have been offering up what amounts to a racialist critique of white, middle-class writers presuming to tell black ghetto stories. And in Slate 's "TV Club" on The Wire , Ste
2 comments
Read more
More posts