Showing posts from January, 2016
Show All

WENDELL PIERCE ON HOLLYWOOD’S RACISM, AFRICAN SELF-DETERMINATION IN THE FILM BUSINESS, AND WHY HE NEARLY QUIT THE WIRE (MF GALAXY 062) 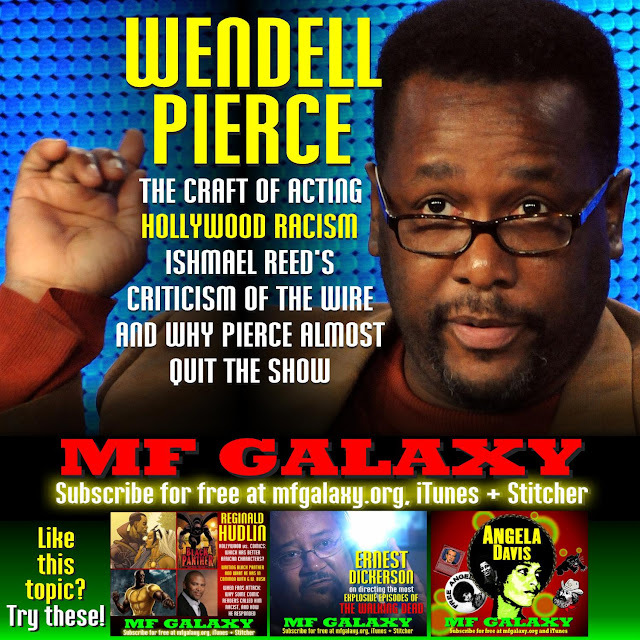 THE CRAFTS OF SCREEN VS. STAGE ACTING, THE RESPONSIBILITY OF AFRICAN CELEBRITIES IN THE US, WHY ANTWONE FISHER FAILED AT THE BOX OFFICE, AND WHY HE SAYS ISHMAEL REED IS RIGHT ABOUT THE WIRE
Best known as Detective Bunk Moreland on HBO’s The Wire, stage and screen actor Wendell Pierce has appeared in over 30 films and more than 50 television shows. He’s also an outspoken commentator on racism in US life, politics, and entertainment, and a social and economic justice activist for the people of his home town, New Orleans. He was also a top fundraiser for Barack Obama’s 2012 presidential campaign.
Way back in 2008, Wendell Pierce came to Edmonton to shoot “Something with Bite,” the werewolf episode of the horror anthology Fear Itself produced by Lion’s Gate, written by Max Landis, who later wrote Chronicle, and directed by Ernest Dickerson, best known for Juice and Never Die Alone.
Pierce and I had a wide-ranging discussion in which he discussed:
* How he deals with disappointment about his a…
Post a comment
Read more 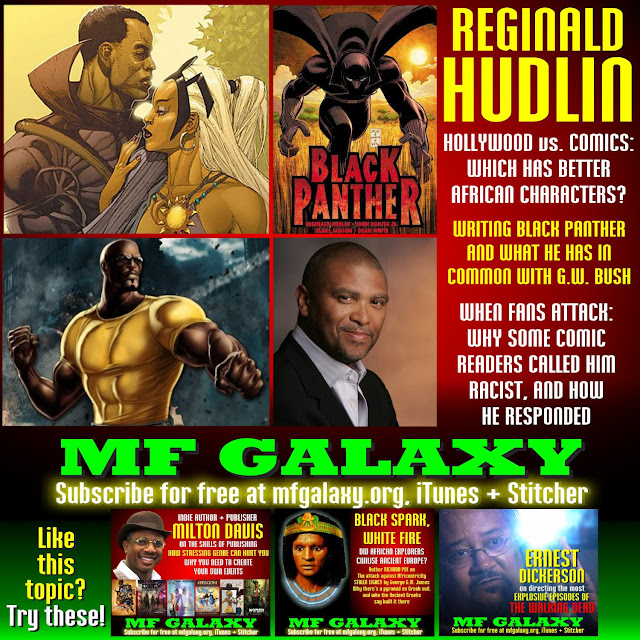 Reginald Hudlin is one of the most successful creators of film and television of the last twenty-five years. He leapt to prominence by writing and directing 1990’s House Party, an intelligent and hilarious film about African American teenage life, following that with, among other films, Boomerang, widely regarded as Eddy Murphy’s finest performance, and the acerbic satire The Great Whyte Hype.
In television, Hudlin created Cosmic Slop, and wrote for and produced Bebe’s Kids, one of the few animated series ever to focus on African characters in the US. He also helped launch Everybody Hates Chris, The Boondocks, and The Bernie Mac Show. He’s directed for many series, including The Office and Modern Family.
During three years as President of Entertainment for the American network Black Entertainment Television or BET, Hudlin, according to his website, “created 17 of the top 20 rated shows in the history of the network including the award-winningKEYSHIA COLE: THE WAY IT IS; AMERICAN GANGSTE…
Post a comment
Read more 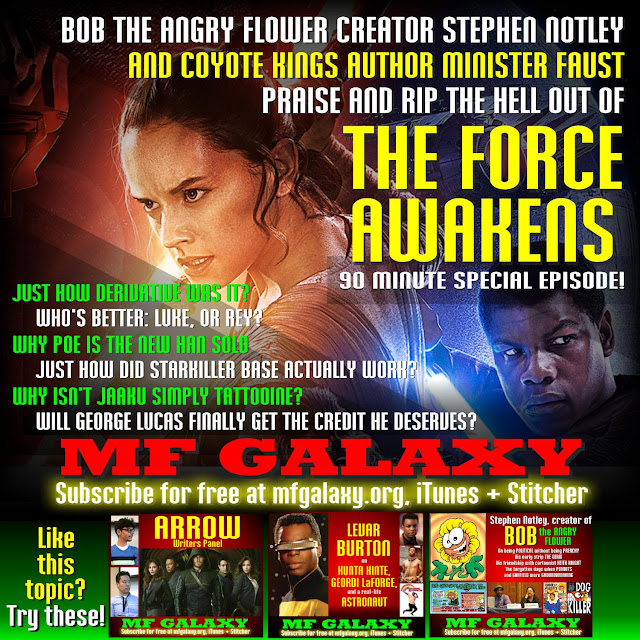 HOW DERIVATIVE IS IT? WILL IT RESTORE LUCAS’S REPUTATION? WHO’S MORE HUMOURLESS: LUKE OR REY? DOES STARKILLER BASE MAKE ANY SENSE? WHO’S IN LOVE: REY/FINN, REY/KYLO, OR FINN/POE? Today’s episode is 100% non-stop spoilers. If you haven’t watched The Force Awakens yet, you obviously don’t care enough about Star Wars to care about these spoilers, or you’re in a coma. Either way, on we go.
Stephen Notley and I have been talking about science fiction and fantasy for more than 25 years. He’s the cartoonist who for more the last two decades has written and drawn the genre-hopping, politically satirical, gonzo fanboy comic strip Bob the Angry Flower about an evil, brilliant, and super-enthusiastic flower named Bob, and the panels of Bob frequently geek over everything S F & F.
Notley’s put out numerous Bob the Angry Flower compilation books and appeared at many major conventions including San Diego Comic Con. He has a vast following and counts among his fans no less than Joss Whedon, who als…
Post a comment
Read more
More posts