Showing posts from September, 2017
Show All

WES BORG ON WHY YOU HAVE TO SUCK AT WRITING, WHY IMPROV MAKES YOU A BETTER WRITER, HOW A HIGH SCHOOL IMPROV TRAINING PROGRAMME IS FAILING A GENERATION OF WOULD-BE IMPROVISORS (MF GALAXY 141) 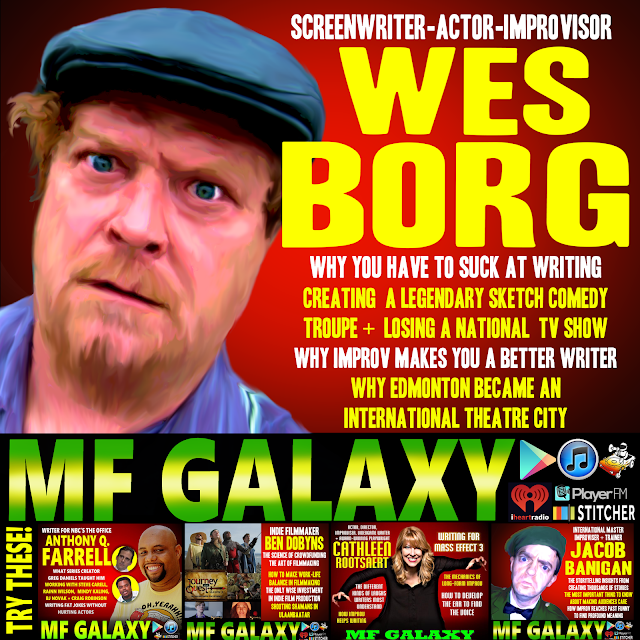 Wes Borg is a legend. In the 1980s he cofounded the influential sketch comedy troupe Three Dead Trolls in a Baggie. He’s written widely for the screen, beginning with the Three Dead Trolls in a Baggie television series, and moving to the 2003 TV movie The Western Alienation Comedy Hour, serving as head writer on the 2004 series The Geek Show, and creating the short film Café Utopia.

He’s also appeared on CBC Radio’s The Debaters and The Irrelevant Show. He wrote the comedy songs “The War of 1812” and “Toronto Sucks” even though people often attribute them to The Arrogant Worms. He co-wrote Piledriver! with Darrin Haggin and Ha! with Chris Craddock, and The War of 1812 with Paul Mather, and he’s acted in various BioWare games including the Mass Effect trilogy and Jade Empire.

MICHAEL DORN AND A BUNCH OF WRITERS ON THE MEANING OF WORF: THE OVERCOMPENSATOR, THE UNFULFILLED, THE LOVER, THE ALIENATED, THE HUMAN (MF GALAXY 140) 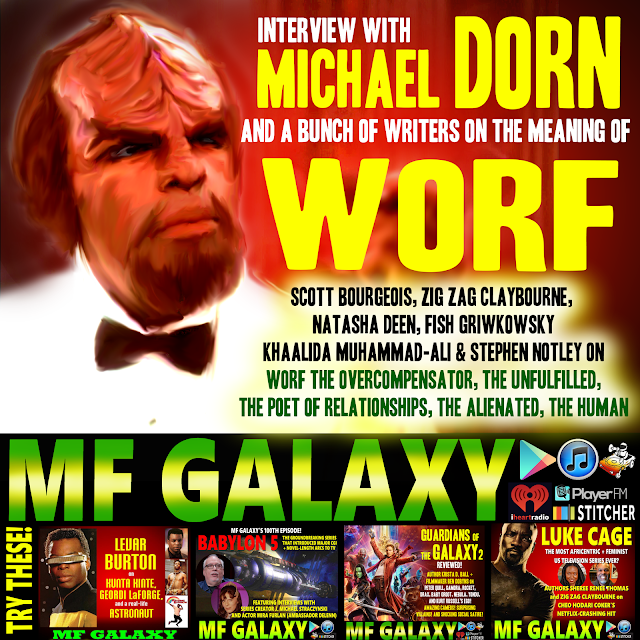 Full disclosure: I grew up watching the original Star Trek in re-runs. Star Trek: The Next Generation debuted the first year I went to university, and it was a major disappointment in many ways, but especially for how it handled Klingons: how they behaved and whom they represented.

Mostly they behaved as obnoxious, single-minded, bloodthirsty brawlers, to be avoided and feared, mostly artless and without sophistication, and to be laughed at for their pompous seriousness and quaint and disgusting customs. Despite growing up among humans, Worf is such an idiot that with august earnestness he calls prune juice a “warrior’s drink.” He’s so violent and stupid that in the Next Generation pilot episode “Encounter at Farpoint” he aims a phaser pistol at the bridge viewscreen when the bad guy Q appears on it because he apparently doesn’t kno…
Post a comment
Read more

ROBERT FISK ON OSAMA BIN LADEN + HOW AL QAEDA’S MURDER-IN-CHIEF LIVED LONG ENOUGH TO SEE HIS OWN IRRELEVANCE; WHY US CYBER-SPYING THE MUSLIM WORLD IS USELESS; THE GREATEST DIFFERENCE BETWEEN EAST AND WEST (MF GALAXY 139) 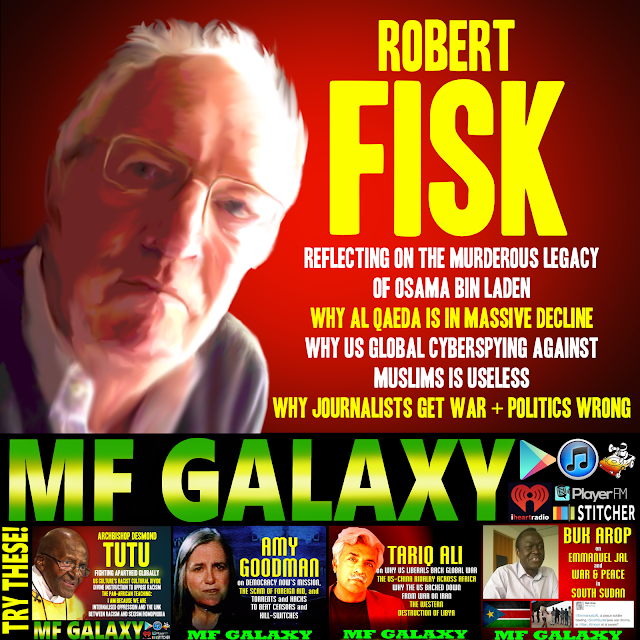 WHY JOURNALISTS HAVE SUCH A PERVERTED VIEW OF HISTORY AND POLITICS

In the world of journalism, Robert Fisk is a rock star not just for the “songs” he’s written but for the people he’s shared the stage with, including Saddam Hussein, Ayatollah Khomeini, and Osama Bin Laden, whom he interviewed three times. Based in Beirut since 1976, Fisk currently writes for London’s Independent, and over four decades he’s covered the Iranian Revolution, the Lebanese civil war, the USSR’s occupation of Afghanistan, and virtually every war or conflict in West and Central Asia.

Having authored five books including his classic Pity the Nation: Lebanon at War, and having received more British and international awards than any other English-language journalist, Fisk frequently defines his role not to “write the first draft of history,” but, by quoting Israeli journalist Amira Hass, “to monitor the centres of power.”

MORENIKE OLAOSEBIKAN ON DISPROPORTIONATE SCOURGE OF HIV-AIDS AMONG AFRICAN-CANADIANS; HOW SHE USED FASHION + ART TO COMBAT THE AIDS PANDEMIC; WHICH AFRICAN/SOUTH AMERICAN COUNTRIES + AFRICAN-CANADIAN NGO ARE THE BEST AT FIGHTING HIV-AIDS (MF GALAXY 138) 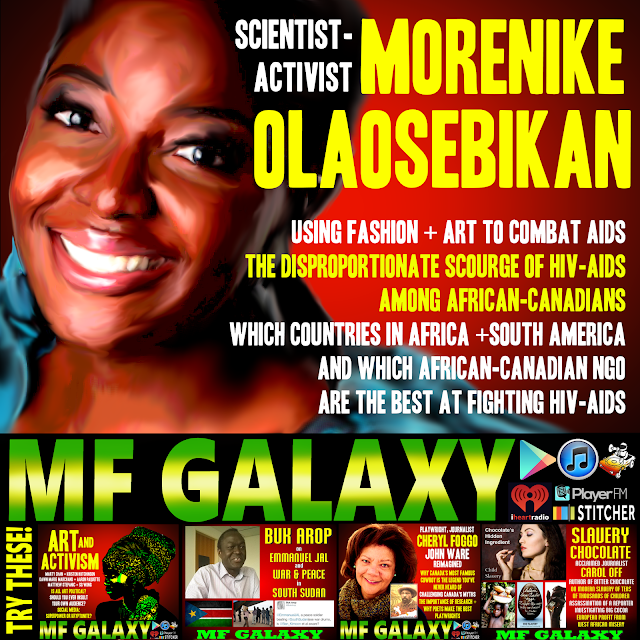 WHY FIGHTING HIV-AIDS FORCES A CONFRONTATION WITH RELIGIOUS VALUES, CULTURAL NORMS, THE EDUCATION SYSTEM, AND THE POVERTY-TO-PRISON PIPELINE; HOW TRADITIONAL RURAL LEADERS AND CLERGY ARE JOINING THE STRUGGLE TO PROTECT THOSE WHO HAVE HIV AND PREVENT OTHER

As shocking as it is in 2017, HIV-AIDS disproportionately afflicts African-Canadians in Alberta. The reasons are varied and complex, which means fighting the pandemic here is all the more difficult. But the reality is that in this province, African-Canadians are six times more likely to be living with HIV-AIDS than the general population, and comprise 26 percent of all new HIV infections despite being only 2.5 percent of the population.
While some people might want to avoid the subject due to stigma or mortal fear, my guest today isn’t one of them, and she’s dedicated her life to stopping new infections and helping those already afflicted.

Morenike Olaosebikan is a health scientist and the founder of Ribbon Rouge, which u…
Post a comment
Read more

MASS EFFECT’S MARK “COMMANDER SHEPARD'' MEER ON THE ART OF VIDEO GAME ACTING, WHICH HOLLYWOOD STAR LOVES COSPLAY AS MUCH AS HE DOES, AND THE MOST IMPORTANT CONCEPTS FOR EXCELLING AT IMPROV (MF GALAXY 137) 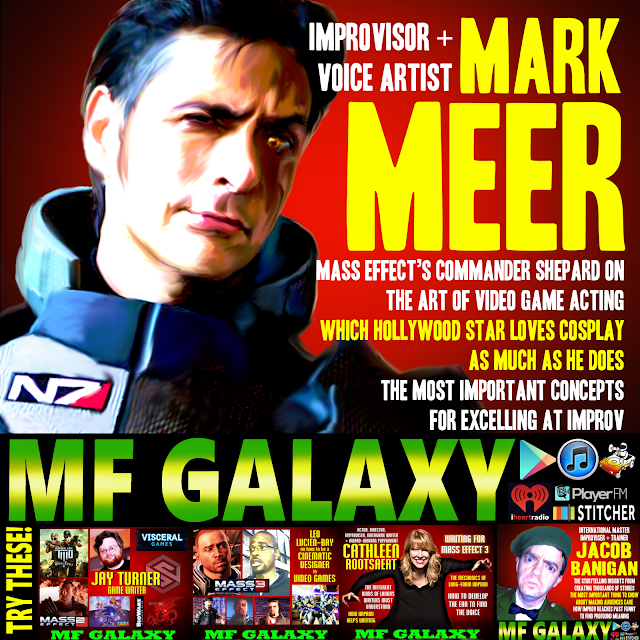 GOING TO CONS IN COSTUME, WHICH CHARACTERS ARE HIS FAVOURITES FOR COSPLAY, WHY IMPROV IS SO VALUABLE FOR ANY ACTOR BUT ESPECIALLY FOR VIDEO GAME WORK

Mark Meer is possibly the most affable fellow in showbiz. He’s a terrific stage actor, voice artist, and improviser, and I’ve known him since we were both cartoonists at university and worked together in the sketch comedy troupe The 11:02 Show. He’s best known as the voice of Commander Shepard from BioWare’s Mass Effect trilogy and has done other video games including Gods of Rome and Baldur’s Gate: Enhanced.

And he’s not just someone whom fans love—he’s a fanboy himself, and attended numerous conventions in costume. He’s literally a pro at cons. He’s also appeared in short films such as Tar Zombies Barbecued and Flight of the Polar Bear; and he’s been a stalwart of the Edmonton theatre community for decades in ongoing longform improv such as Die-Nasty! and Gordon’s Big Bald Head. And if that weren’t enough, many radio liste…
Post a comment
Read more 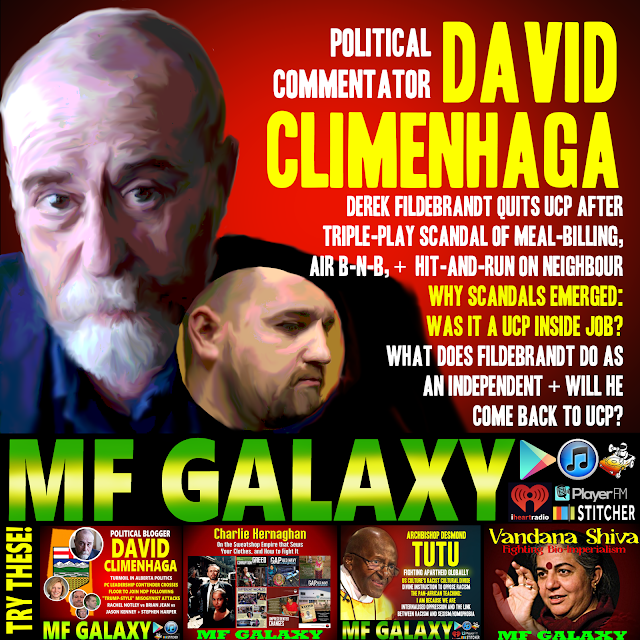 When the New Democratic Party of Alberta formed a majority government in 2015, I quipped that night that Alberta had just become a Western democracy. After all, it was the first time in forty years that the governing Progressive Conservative Party had been voted out.

But my joke depressed me. After all, it’s just not normal or healthy for any jurisdiction, let alone one of two economic engines of a G-7 liberal democracy, to be shackled to any one party for almost half a century. My joke depressed me because it meant we were just a petro-state. But hey, even Alaska under Sarah Palin paid higher oil royalties to its citizens than Conservative Alberta did. What is up with that?

TARIG ABUBAKAR - CREATING PAN-AFRICAN MUSIC FROM SUDANESE BASE, GROWING UP IN KHARTOUM’S TOUGHEST ’HOOD, COMING TO CANADA WITH $10 + NOTHING ELSE (MF GALAXY 135) 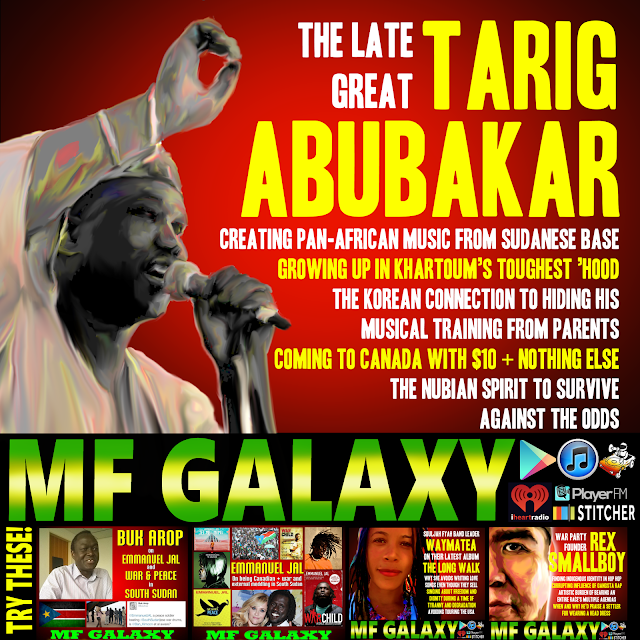 THE KOREAN CONNECTION TO HIDING HIS MUSICAL TRAINING FROM PARENTS, THE NUBIAN SPIRIT TO SURVIVE AGAINST THE ODDS

Today’s show lets me reach back into the archive for a conversation with a remarkable man who died far, far too young. That man was the Sudanese-Canadian musician, singer, lyricist, music producer, and band leader Tarig Abubakar.

Abubakar came to Canada in 1988 to build his fame and fortune in North America, and despite a rocky start he’ll tell you about in this episode, he formed his pan-African band the Afro-Nubians, toured the country four times, and delighted hundreds of audiences across Canada. He also released three superb albums: 1994’s Tour to Africa, 1995’s The Great Africans, and 1997’s Hobey Laik. His bandmates included guitarist Adam Solomon, Joe Slant, and Mohammed Hagelamin. Together they were named band of the year at the Toronto African Music Awards.

Tragically in 1998 while visiting his home country, Abubakar died in a car accident. He was only …
Post a comment
Read more

GRINDHOUSE FILMMAKER JEFF CARROLL ON HOLLA IF I KILL YOU, FINDING A DISTRIBUTOR WHO WON’T KEEP YOUR MONEY + WHY YOU SHOULD WORK WITH COMEDIANS + SUSPENDED LIQUOR LICENSES (MF GALAXY 134) 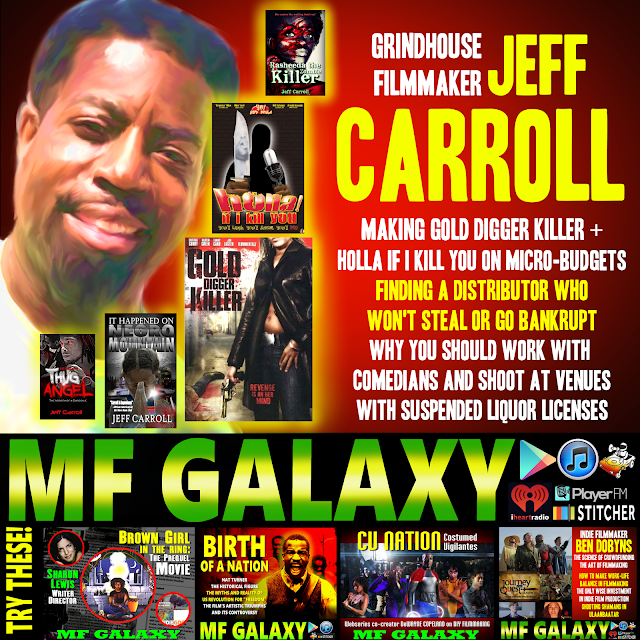 WORKING WITH DAVE CHAPPELLE, WHY JORDAN PEELE WOULD LOVE IT HAPPENED ON NEGRO MOUNTAIN, WHEN TO GO FULL SHARKNADO ON YOUR SCRIPT

Today we get to combine two fields: making movies and making novels. Jeff Carroll is an amazing creator. He's worked as a booker at comedy clubs and also managed comedians, which gave him access to plenty of working comics whom he could cast the movies he wrote and produced, including his Blaxploitation/ B-Movie/ Grindhouse films such as Holla If I Kill You and the award-winning Gold Digger Killer.

When his distributor went belly-up and took his money beyond the grave, Carroll leveraged his existing intellectual property by turning one of his features into a novel. He's also a speaker and known online as Yo Jeff the Hip Hop Dating Coach. So the man definitely knows how to hustl…
Post a comment
Read more
More posts