SG WONG ON WORLD-BUILDING, HELPING WRITERS GET PAID, AND GOING INDIE WHEN YOUR MAJOR PUBLISHER DOES NOTHING FOR YOU (MF GALAXY 084) 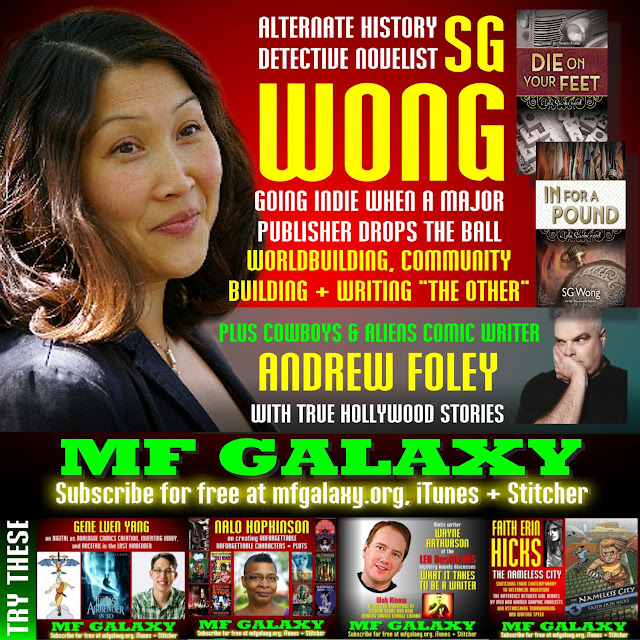 WRITING HARDBOILED DETECTIVE FICTION IN ALTERNATE HISTORY CRESCENT CITY, VALUING YOUR OWN WORK, AND HOW TO WRITE “THE OTHER” RESPECTFULLY

SG Wong is the creator of the Lola Starke hardboiled detective series set in Crescent City, California, in an alternate history in which China colonised North America. Arthur Ellis Award-finalist Wong is also a sparkling stalwart of Edmonton’s literary scene as an organiser of writer conferences. She’s one of those outstanding individuals whose endless energy benefits everyone in the community.

In this episode of MF Galaxy, SG Wong discusses:

Along the way, Wong refers to Gail, meaning the novelist, writing teacher, and literary organiser Gail Sidonie Sobat. SG Wong spoke with me live onstage at Authorpalooza 3 at Devaney’s Pub in Edmonton in April, 2015.

SG Wong reads from Die On Your Feet

At Authorpalooza 1 from October 2014, I spoke with comic book and video game writer Andrew Foley. Andrew Foley writes for Beamdog Game Studio in Edmonton, and wrote the graphic novels Parting Ways (illustrated by Scott Mooney and Nick Craine) and Done to Death, illustrated by star-artist Fiona Staples. But to some, Foley is best known as the writer of the graphic novel Cowboys & Aliens, and that’s the subject of “Andrew Foley’s True Hollywood Stories.”