MICHAEL PARENTI ON THE ASSASSINATION OF JULIUS CAESAR (MF GALAXY 056) 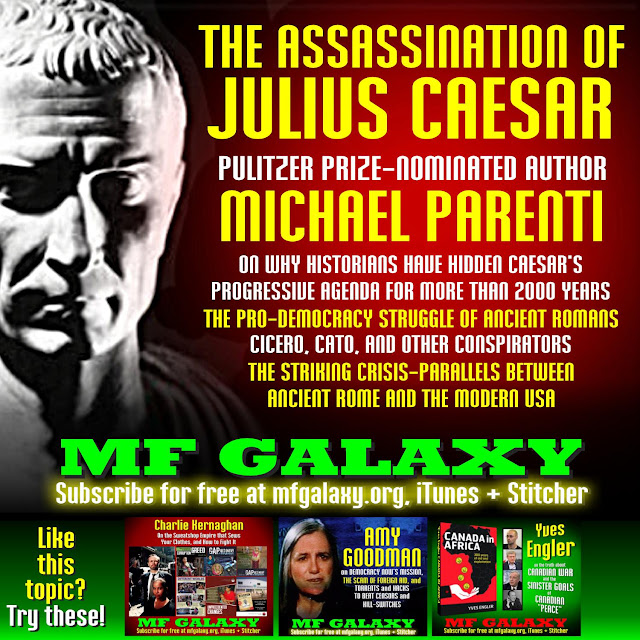 PULITZER-NOMINATED AUTHOR ON THE ROMAN PRO-DEMOCRACY STRUGGLE AGAINST THE ELITISTS WHO ASSASSINATED CAESAR, AND THE STRIKING PARALLELS BETWEEN THE POLITICAL CRISIS OF ANCIENT ROME AND THE MODERN USA

Political Scientist Michael Parenti is a tireless activist-academic who has taught at many colleges and universities inside and outside the United States. He is a celebrated lecturer whose humour and anecdotes have delighted audiences across the world, in person and via broadcast.

Hundreds of his articles have appeared in scholarly journals, political periodicals, and popular magazines and newspapers. Michael Parenti is author of more than 20 books on the power of media, political elites, the wealthy, and US imperialism. His writings have been translated into 17 languages and include:
His 2003 history The Assassination of Julius Caesar: A People’s History of Ancient Rome received a nomination for the Pulitzer Prize. Kirkus Reviews calls it “savagely entertaining ... history at its most provocative.”
TO LISTEN/DOWNLOAD FREE,RIGHT-CLICK AND SELECT “SAVE AS”

Way back in 2003, the Parkland Institute in cooperation with the University of Alberta Students’ Union Revolutionary Speakers Series hosted Dr. Michael Parenti at the Myer Horowitz Theatre. He joined me at CJSR studios for conversation about:
Get the book


A Republic Against Caesar - Class Power and Conspiracy in Ancient Rome

To hear nearly one hour of bonus content featuring my conversation with Michael Parenti, click here to become a sponsor for a dollar or more per week.
By funding MF GALAXY, you get access to all extended editions of the show, plus video excerpts from selected interviews as they become available. This extended edition includes Michael Parenti discussing:
You’ll also hear Parenti, at my request, reciting a touching poem from one of his collections, and explaining the significance bread and soda pop to his childhood and the fate of this father