TONIGHT ON THE TERRORDOME: Shawn Taylor on "Big Black Penis," Part One 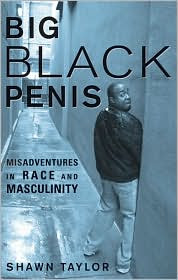 
Shawn Taylor is a complicated man with a remarkable capacity for telling his story and investing it with social and philosophical considerations. Currently living in the area, he’s a performance poet, a martial artist, a spiritual seeker, a philosophy grad student, an artist-provocateur, and the author of the memoir Big Black Penis: Misadventures in Race and Masculinity.

As the subtitle suggests, ’s book explores African-American and gendered experience, but in directions not commonly seen as intertwining.

In addition to insightful and often hilarious reflections on dating, sexual awakening and marriage, Taylor explores his own complex intellectual and emotional life during the ending of relationships, the origins of his own homophobia and how he’s confronted it, his bizarre foray into the Euro-American men’s movement, his confrontations with violence and death, and even his experiences as a science-fiction and fantasy fan.

Imagine Eldridge Cleaver’s Soul on Ice mixed with the movie Clerks, and you’ve got a picture of what Big Black Penis truly is. In its original form, it won the 2006 DIY Book Festival Award for best self-published book.

Shawn Taylor spoke with me from his home by telephone on September 7. We’ll shortly hear how ’s actual death on the operating table following a shooting, and his subsequent revival, changed him forever. But we’ll begin with reactions to the book’s title, including bookstore suppression.

Carole McDonnell said…
Ah, BGP's! The great terror, the greatly-desired! ::smile:: I wish him success with his book. -C
5:41 pm