TONIGHT ON THE TERRORDOME: Amiri Baraka on Barack Obama

I have never seen a movement in the gather as much excitement and momentum as the campaign to deliver the nomination of the US Democratic Party to Barack Obama.

It’s easy to get excited by it, and I get it. I never expected to see, in my own lifetime, any African-American achieve the presidency, and its looks as of this broadcast—recorded on Tuesday night before the results of the March 4th primaries are in—as if Obama will get the nomination and win the White House.

But my own excitement, based in part on seeing a man from my own so-called race get this far—indeed, like me, Obama is half-Kenyan—doesn’t overpower my determination to see justice advanced, not just image.

From what I can see, the primary appeal of the Obama campaign is what it wants to symbolise: that the United States has overcome racial discrimination, that the US need not be a warlike society driven by an economic and cultural imperative to dominate and destroy, that youthful, eloquent, non-insiders can rise to the highest offices by merit of their ideas and their appeal to regular folks.

However much American citizens believe in this symbolism—and I’ve been asking several, highly accomplished Americans in a recent slew of interviews on other topics—there is little evidence that there is substance.

On the level of policy, there seems to be little reason to believe that an Obama presidency would be better than that of a Clinton or a McCain.

Ralph Nader’s election website points out that Obama and his rivals promise equal inaction on preventing and punishing corporate crime, on a living wage, on the repeal of the anti-union Taft-Hartley Act, on NAFTA and the WTO, on Canadian-style health care, on sustainable ecological and economic development, on military reduction, on media monopoly, on corporate power, on electoral reform, on the $50B annual cost of the so-called War on Drugs, on “three strikes” laws, on the prison-industrial complex, on Afghanistan, on Israel-Palestine, on Cuba or on Iraq.

Indeed, Obama has already announced that he would bomb Pakistan, a US ally; Obama has abandoned his years’ long advocacy of the Palestinian plight in favour of an aggressively pro-Israel stance; he has engaged in saber-rattling on Iran; he has described Cuba’s revolution as a “dark time,” saying nothing of the American-imposed status of “bordello of the Caribbean” on that island-nation prior to 1959.

And Obama has said nothing in defense of , an Afrikan country the has just bombed—an act of war.

Unfortunately, in the , criticism of Obama often seems to come from only one source—the pro-Clinton camp.

And for every flaw of Obama’s, there are dozens more in the Clinton clan, a group which expanded the racialised drug-sentencing laws of the US and saw the US become one of the world’s leading jailors; a group which bombed Sudan and destroyed half its pharmaceutical production, leading to the deaths of unknown thousands; a group which oversaw years of US-led sanctions which killed one and a half million people in Iraq, a group which successfully prevented the Security Council from employing the word “genocide” and thus allowing the actual genocide of nearly a million people to unfold in Rwanda. 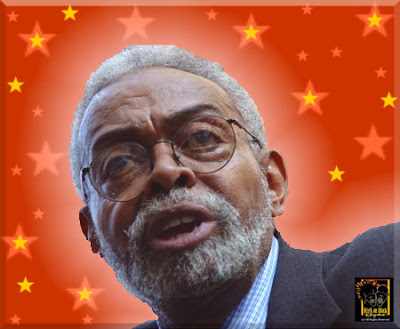 One man who’s concerned about uneven critiques of Barack Obama is Amiri Baraka, the acclaimed Afrikan-American playwright, poet and essayist who was a leading force in the Black Arts Movement of the 1960s and 70s, when he was known as Leroi Jones. Amiri Baraka has lectured across the world on music and culture. He is the author of over 40 books of essays, poems, drama, and music history and criticism.

His most famous works are the analysis of AA music Blues People and the play Dutchman, both from 1963. His most recent work is The Essence of Reparations, a collection of essays addressing “racism, national oppression, colonialism, neo-colonialism, self-determination and national and human liberation.” Baraka has taught at Yale, , and the State University of New York at Stony Brook.

His awards and honors include an Obie, the of Arts & Letters award, the James Weldon Johnson Medal for contributions to the arts, Rockefeller Foundation and National Endowment for the Arts grants, Professor Emeritus at the State at Stony Brook, and the Poet Laureate of New Jersey.

Amiri Baraka remains politically active, and on the Obama candidacy, he warns that unbalanced criticism directed at Obama alone is often pro-Clintonism in disguise, a Clintonism based on grossly misplaced Afrikan-American loyalty.

Baraka also warns that, while it’s useful to get Obama elected, the man will do nothing on behalf of progressive causes and the needs of America’s poor, its people of colour, its environment and its need for justice, without an aggressive, progressive movement that refuses to go away at the sight of a dazzling smile and the sound of catchy slogans.
American jingoism Amiri Baraka Barack Obama Black Arts Movement Cuba FTO Hillary Clinton Kenyan NAFTA race Ralph Nader Taft-Hartley

Anonymous said…
Your interview with Amiri Baraka sounds fantastic - I sure hope it will at some stage be available for download or on podcast for us in the south! From what you've outlined I'm very much interested in what he might have to say.

I remind myself constantly that my roots are communal not individual, and as in any community we each have a role to play. No community survives that has only hunters, or planters, or whatever, each one of us can play the role that is offered us. Now I'm inferring alot from your comments, but in my own simplistic terms while I uphold Audre Lorde's contention that the master's tools would never dismantle the master's house, it can be damn useful to have someone passing food out the window while you're jack-hammering the foundations!! As a striving academic I know I can sometimes get so caught up in the rage I feel about the many social injustices that pervade the communities and nation in which I live that I forget that for those for whom putting food on the table is an everyday challenge, who sits in the whitehouse and the ideology they espouse does have import.

Of course its a conflicted issue I have - for the sake of my young son with whom I battle daily to have him reject the perjorative messages he receives continuously regarding the 'unworthiness' of his race/skin-colour - symbolism is not meaningless to me. At the same time the potential for the most powerful and rapaciously imperial nation in the world to have a black face, even a woman's face, at its head is disturbing. And as you have already pointed out, a black figure-head might lead some to claim the death of racism and race disadvantage. They are also my concerns. However more recent media furore would make such a claim ring hollow indeed. It seems that the 'incidentally black' candidate may be too black for many after all. How utterly unsurprising! - Erika
8:07 pm

Anonymous said…
I'm trawling through sites in the USA to see what radicals in the States think of Obama. I'm deeply uneasy (as an Irishman and European) with what I see as the battle of the two crimes that dare not speak their name - Race and Feminism. Obama is trying hard not to be black and Clinton is doing her best not to be a woman, and as Baraka says (rightly in my view) neither will do much for anybody. This site has been really interesting. I'll return. Thanks.
1:44 pm