TONIGHT ON THE TERRORDOME: MALCOLM X ON ACHIEVING FREEDOM 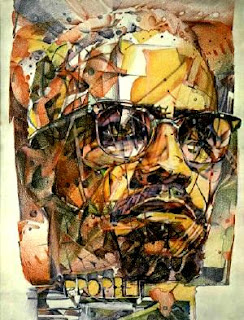 This Saturday, May 19, marks the 82nd anniversary of the birth of one of the foremost Pan-Afrikanists of the 20th Century: Malcolm X.

Born in 1925 in Omaha to parents active in Marcus Garvey’s 2-million member United Negro Improvement Association, Malcolm learned by age six the danger of living while Black in the United States. His father was murdered, apparently by Klansmen. Despite this trauma, in school he was a top student, even becoming class president. But his teacher dismissed his desire to be lawyer, saying that being a carpenter was more realistic for “a nigger.” 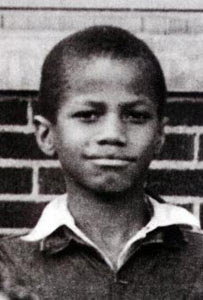 Following the father’s death, the family disintegrated. Teenaged Malcolm drifted away to and , and into a life of crime. Finally arrested and convicted in 1946, he was sentenced at age 21 to eight to ten years in prison where, ironically, he found new life.

Through letters and visits from his brother, he became entranced with the Nation of Islam, a small American-born mixture of Garveyist self-determination, clean living, Islam, Black Freemasonic teaching and mysticism. Rejecting a surname forced on him by American apartheid, but lacking any means of knowing the names of his ancestors, he adopted the mathematical short-hand for “unknown,” and thus would one day be known to the world as Malcolm X.

Between 1952 and 1963, Malcolm became a juggernaut of an orator and organiser. He built the Nation of Islam from a few hundred members to tens of thousands, becoming its best known speaker and the unofficial second-in-command after its leader, Elijah Muhammad. His key message was the need for Afrikans to determine their own destiny and lift themselves up through collective political, economic and cultural action.

Despite minimal formal education, Malcolm was vastly-read, conversant in countless topics and a frequent guest on television; he debated at universities across the and . For his defense of self-defense in the face of racial domination and terrorism, White America labeled him a threat. But to much of Afrikamerica, he was already a hero.

But behind the scenes, Malcolm’s monk-like lifestyle and unshakable integrity drove his anti-corruption agenda inside the NOI. By 1963, jealousy over his fame and prowess and fear ab 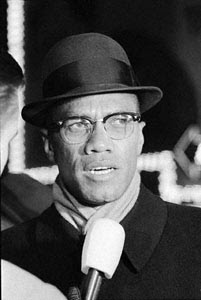 out his potential command and house-cleaning inside the NOI caused a major split between him and the ruling circle. Karl Evanzz’s brilliant book The Judas Factor: The Plot to Kill Malcolm X argues convincingly that proven police and FBI infiltration of the NOI manipulated the existing conditions to clear the way for Malcolm’s expulsion and eventual extermination.

But Malcolm didn’t stop forging ahead after being excommunicated. He formed the non-religious Organisation of Afro-American Unity, modeled after the newly-formed Organisation of African Unity, at which he and his group were granted observer status. Although Malcolm’s pilgrimage to is legendary, Malcolm’s acceptance of Whites did not hinge on that visit; he’d already visited a decade previous and witnessed Islam’s multiracialism. But now that he was free of NOI control, he was free to make his own alliances. And most of his work on that front was not with other Muslims, but with Afrikans around the continent and in the .

Evanzz’s book demonstrates that in the final year of Malcolm’s life, Malcolm’s two major tasks were to bring the United States before the World Court on charges of genocide, and developing a behind the scenes alliance with Dr. Martin Luther King.

Despite his awesome organising abilities, Malcolm was able to complete neither project, because on February 21st, 1965, assassins associated with the Nation of Islam murdered him in . Yet several events preceding that day indicated attempts on his life far greater than the NOI’s reach, including an attempt to poison him in and the denial of his entrance to . As well, even one of 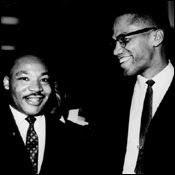 his own bodyguards was later revealed to be an infiltrator from the NYPD, despite the fact that police had received numerous warnings of intentions on Malcolm’s life, and had done nothing to stop them.

Nevertheless, despite character assassination, despite outright murder, in the decades since 1965, Malcolm’s name and ideas have become inseparably linked with the struggle for Afrikan independence and self-determination.

Tonight’s presentation is from a speech archived at brothermalcolm.net, the premier Malcolm X research site on the internet and

accessible via the Bro-Log. Malcolm spoke on January 7, 1965 at the NYC Labour Forum put on by the newspaper of the Socialist Workers' Party, The Militant. His topic was "The Prospects for Freedom in 1965." Along the way, Malcolm cites the Mau Mau, the British epithet for the KLFA, or the and Freedom Army, a national liberation struggle against British colonialism. He also discusses Moshe Tshombe, the reactionary separatist who proclaimed 's secession from the newly liberated , which hastened the disintegration of federal government authority and laid the path to the capture and murder of liberationist Prime Minister Patrice Lumumba. Malcolm’s final words in tonight’s speech eerily prefigure his own death, less than six weeks from that day.

Unknown said…
Malcolm X was born on May 19, 1925. This weekend we celebrate what would have been his 82nd birthday. Please join us on the Electronic Village and share your thoughts on this African American hero. Let your voice be heard. peace, Villager
5:21 am