Tonight on The Terrordome: Chris Rock on Wealth vs. Democracy

- June 21, 2006
According to a 2001 study published by United for a Fair Economy, the wealthiest 1% of Americans own one-third of all wealth in the United States. To put it in dollar terms, in 2001 the richest hundredth of Americans possessed, by themselves, more than fourteen trillion dollars worth of cash and assets.

On the other hand, half of US society--around 130 million people--owned less than 3% of the country’s total wealth.

How does that look from a global perspective? According to Project Censored, “As always, America’s economic trends have a global footprint—and this time, it is a crater. Today the top 400 income earners in the U.S. make as much in a year as the entire population of the 20 poorest countries in Africa (over 300 million people).”

The Guardian newspaper of the UK said in a 2003 article, “One in every three people in the world will live in slums within 30 years unless governments control unprecedented urban growth, according to a UN report.

"The largest study ever made of global urban conditions has found that 940 million people - almost one-sixth of the world's population - already live in squalid, unhealthy areas, mostly without water, sanitation, public services or legal security.”

The Guardian article continued, “The report... found that urban slums were growing faster than expected, and that the balance of global poverty was shifting rapidly from the countryside to cities. Africa now has 20% of the world's slum dwellers and Latin America 14%, but the worst urban conditions are in Asia, where more than 550 million people live in what the UN calls unacceptable conditions.”

At the beginning of tonight’s The Terrordome, you'll hear one argument, contained in the lyrics of the BDP song, about how some of those who are already wealthy created their wealth in the first place--by being drug lords. As KRS-One points out, many of the wealthiest and most respected families in the United States were drug lords, including the Kennedys, who sold alcohol when it was illegal.

A 2004 Guardian story entitled “How Bush's grandfather helped Hitler's rise to power” explains how patriarch Prescott Bush traded with the Nazis before and during World War II.

Currently, the wealthy deform our society with other legal but grossly anti-democratic or destructive actions, from the formation of massive media monopolies to firing thousands of workers during record profits to pollution to filling grocery stores with carcinogen foods and household cleansers.

Tonight on The Terrordome, we’re going to take a slightly more relaxed look than we usually would at such serious issues. Instead of dealing with legalities, we’ll deal in laughter, in turns both hilarious and harrowing.

Chris Rock has been hailed for his insightful and angry politically-inspired comedy.

He’s starred in movies such as New Jack City, CB4, Dogma and Head of State. He once was a Saturday Night Live regular; his talk show was one of HBO’s highest-rated programmes, and his sit-com Everybody Hates Chris, loosely based on his childhood, is a critical hit. His 1997 book Rock This was on the bestseller lists of both the New York Times and the Wall Street Journal. He’s won a Cable ACE Award, a Grammy, and two Emmys, including for Best Writing.

At a time when superstar comedians such as Dave Chappelle have been criticised for reinforcing some of the most offensive and damaging stereotypes of Afrikans in the US, Chris Rock continues to point out where Black folks are doing wrong, and to point the way on how to do right. 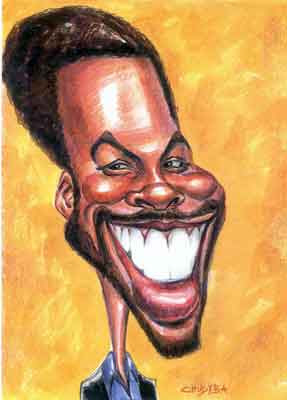 Listen to tonight's The Terrordome to hear Chris Rock on Wealth vs. Democracy.

DaProkah said…
Oh damn! And I MISSED that?


Chris Rock is an inspriation oto me-escpecillay now that I have stepped in the arena of stgand up comedy.

It's nice to hear that someone's keeping tabs. Drop me a line. love to hear updates on your writing project(s)
5:06 pm

Anonymous said…
Hey, that's a very very nicely composed article. Lots of proof, I like that. Well done for you. Keep an eye out for George Carlin and his arguments about religion and war.

George Carlin is my favourite comedian, rofl. Check him out and see whaet you can conclude after listening to "Dumb Americans" by George Carlin.