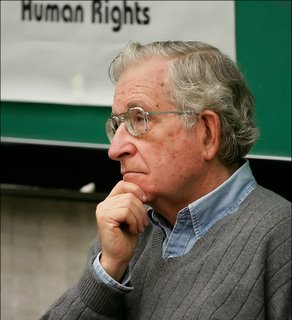 Chomsky says during his opening remarks: "There was no effort to conceal the fact that Gaza disengagement was in reality West Bank expansion. The official plan for disengagement stated that Israel will permanently take over major population centers, cities, towns and villages, security areas and other places of special interest to Israel in the West Bank. That was endorsed by the U.S. ambassador, as it had been by the President, breaking sharply with U.S. policy.

"Along with the disengagement plan, Israel announced investment of tens of millions of dollars in West Bank settlements. Prime Minister Sharon immediately approved new housing units in the town of Maale Adumim that’s to the east of Jerusalem, the core of the salient that divides the southern from the central Bantustan, to use Benvenisti’s term, and also announced other expansion plans.

"There is near unanimity that all of this violates international law."

And for an entirely inappropriate image, click here (keep in mind I'm a deep admirer of Dr. Chomsky).
Email Post